Posted at 12:00 PM EST odds are subject to change.

Please note, we are going to be "selling" a half-point with the Cowboys and play them at -3 +109. You play it as you see fit.

8:15 PM EST. Could this be the last time we see Thomas Edward Patrick Brady Jr. suit up for the Buccaneers? If we are to believe the pick sellers and the pundits, the career of the 45-year-old G.O.A.T. is destined to extend at least to next week, as Brady has never lost to the Cowboys, who he is 7-0 against in his lifetime. The latest of those victories came in Week 1 this season when the Buccaneers knocked off Dallas 19-3. That Week 1 victory is arguably the high point of the Buccaneers season, as they would go on to post a sub .500 record (8-9) over the next four and a half months, and needed a Week 17 win over Carolina to clinch the saddest of division titles in the pitiful NFC South. A division where the Falcons, Panthers, Bucs and Saints combined to go 29-39, with none posting a positive point differential. In short, the Bucs were the best of a bad lot.

When a team wins just eight games, it doesn’t take long to sift through those victories and find flaws, so we are going to do just that. Of the eight W’s in the Bucs racked up this year, only two came against teams with a winning record, which of course, was the Cowboys in Week 1 and Seattle in Week 10. The other six Tampa wins came over New Orleans, Atlanta, L.A. Rams, New Orleans, Arizona and Carolina. Those five teams combined for a putrid 30-55 mark this season.

Brady was out the door last season, having officially retired on February 2, 2002. At the time Tommy Boy said, “I have always believed the sport of football is an ‘all-in’ proposition – if a 100% competitive commitment isn’t there, you won’t succeed, and success is what I love so much about our game. I have loved my NFL career, and now it is time to focus my time and energy on other things that require my attention.” Presumably those “other things” were his wife and children, but Brady was not made for the domestic lifestyle, as just six weeks later, he announced he was going to return for his 23rd season. Tom announced on Twitter, "These past two months I've realized my place is still on the field and not in the stands. That time will come. But it's not now.” In addition to that message, Brady posted this picture of his family walking away from the camera. A sign of things to come. 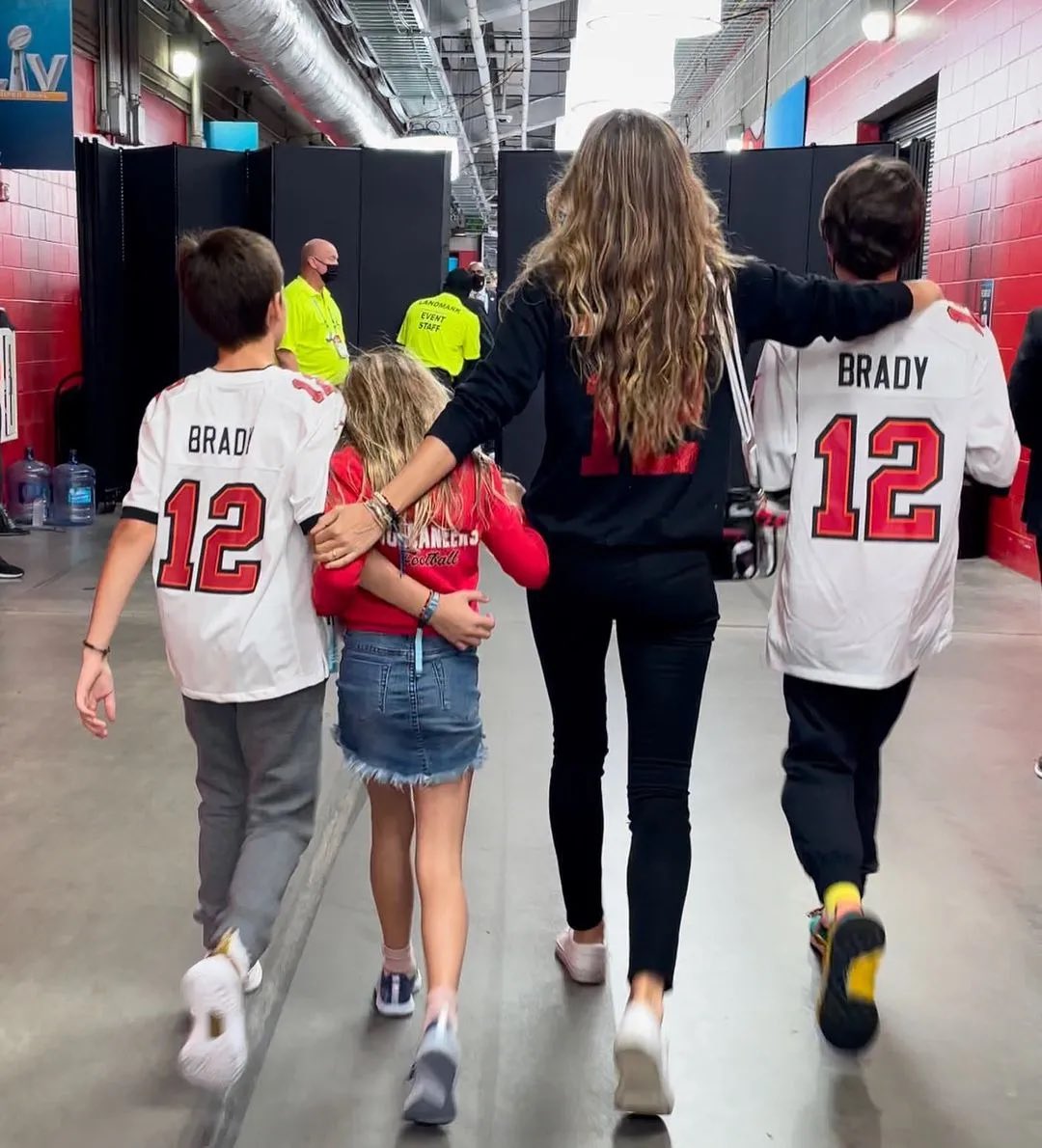 What led Brady back to the field has been debated, but as always, if one were to follow the money, one would be on the right track. Not long after he announced his return, stories began to leak that there was trouble in paradise, with the breadwinner of the Brady family, supermodel Gisele Bündchen, having had enough of her old man. Brady was being kicked to the curb and his divorce was on the fast track. When rich people get divorced as quickly and as quietly as Brady and Bündchen did, it’s very likely that they simply followed their ironclad prenuptial agreement, signed a couple of non-disclosure agreements, and boom, D-I-V-O-R-C-E, as Tammy Wynette would sing. It’s always sad when love doesn’t win in the end, but once the jokes about Brady not being able to handle driving the kids to soccer practice stopped, people started to wonder what really could have gone wrong. After all, Gisele was always at Brady’s games with their kids up in the owner’s box. They traveled with him all season and by all accounts, they were as solid as a celebrity couple can get. If love wasn’t the problem, it must be the money right?! But how could a supermodel and the greatest quarterback of his generation fall on hard times? Three letters. F-T-X.

We’re not going to get into all of that financial drama in the crypto space, but once you find out that Brady talked his ex-wife into a large stake of that modern-day Ponzi scheme, everything Brady has done since mid March of last year starts to make sense. Dude needs the money. That’s why there is no “will he, or won’t he?” retirement talk with Brady this offseason. Instead, we have a leaked story from December where The Athletic reported that Brady could be reunited with the Patriots. If that happened, it would have to be a Robert Kraft call, and over the dead body of Bill Belichick. This week, there are rumors that Brady could be in Vegas to hook back up with his former offensive coordinator in Josh McDaniels. Regardless of what his future holds, you can bet your last dollar that Brady will be back to cash checks next season, but if any of these teams think Tommy Boy is going to be the savior at his advanced age (he’ll be 46 by the fall), they are as desperate as those that dumped their life savings into FTX.

Another group that would be misguided to hype Brady tonight are those that cannot fathom that the G.O.A.T. won’t show up tonight and have his best game of the season in a playoff game on Monday Night Football. What reasoning do they have to support that position? Well, he’s done it before! Tampa O.C. Byron Leftwich said, "He's been in a lot of these games. He understands how these games have to be played. The last of my worries, really, is Tom. When you get in these moments, it's making sure we're good around him, making sure we're all on the same page." You can almost hear the doubt in Lefwhich’s words when you read them, as he tries to talk himself into this being Brady’s game to win, and if the Bucs lose, it’s because they “weren’t good around him.” On his SiriusXM radio show this season, Brady was never shy about throwing his teammates and coaches under the bus for Tampa Bay’s poor performances week in and week out. Rarely did his own accountability range outside of the cliche, “I have to be better, too.” We’d love to be a fly on the wall in the Bucs' dressing room when the G.O.A.T. isn’t around, just to hear what they really think about him. Dude thinks he’s bigger than the team, and he’s been planning his next moves for months. Are we to believe that Brady’s heart is really in this game tonight? Even if it is, and he plays at his best, is it going to matter?

Enough about the Bucs, as we are going to give a little space to a Cowboys team that is being totally disrespected by the touts and talking heads. Recent results loom large, and the ‘Boys didn’t have the strongest finish to their season, going 2-2, while cashing a ticket in just one of those games, a 40-34 win over the Eagles in Week 16. Even with that victory, the Cowboys' path to the NFC East crown was not clear, as they still trailed Philadelphia by a full game despite racking up double digit wins. In Week 14, Dallas would knock off the Titans 27-13, but that margin of victory was not enough to send their backers to the pay window. Not covering that game looks worse because it was in prime time, and the Titans made it very clear that they were not going to be putting a full effort in with an AFC South title game against the Jaguars in Week 18. The Cowboys dropped a 26-6 decision in Washington to end the year, but that game meant practically nothing, as the East-leading Eagles only needed a victory as a huge favorite in New York to seal up the top seed.

While the suits are quick to slap Brady on the back and give him the benefit of the doubt, they are not willing to do the same for Dak Prescott, who is taking heat for his propensity to throw interceptions. If we’ve heard it once, we’ve heard it 1000 times, “Prescott has thrown 15 interceptions in his last 12 games and he was picked off at least once in each of his final seven games to end the regular season.” You know what? Who cares? Brady threw seven of his nine interceptions this season late in the year as well and nobody is talking about that. Until Dak and the Cowboys finally get over the hump and win a playoff game or two, they are not going to get any respect. Until the pundits and pick sellers see it, they can’t fathom it could happen.

To close, there is a damn good reason the oddsmakers made the Cowboys the favorite here on the road in Tampa despite knowing that the market and the media were going to eat up the Bucs as an underdog. How can Brady be a pooch at home in a playoff game? Easy, he's just an average QB (physically) and the Bucs around him aren’t much better. There are stars, yes, but the sum of those parts are not better than the whole. Meanwhile, the ‘Boys are battle tested with a 12-5 record and having played in a division that almost sent four teams to the playoffs, but had to settle for just three. If the Bucs played in any other division, they wouldn’t be here right now.  The playoffs are where frauds go to be exposed. As former Cowboys’ wideout Terrell Owens said, “Getcha popcorn ready!”

Join us for a free sportsbetting webinar, specifically, LIVE BETTING, and how to take advantage of the house inefficiencies. We'll show you how to WIN at LIVE betting. We don't just tell you, we show you with screen sharing while making real bets with REAL money.

We'll go over proven strategies for LONG TERM SUCCESS. How to consistently win and how to avoid the cardinal sins that most sports bettors/investors make.

Join myself and @matthewfinnie on Wednesday, January 18th on our Twitch channel: https://www.twitch.tv/sherwoodsports anytime after 6:15 PM EST.

We'll share the best LIVE BETTING strategies while showing you how to consistently beat the number.

We've had 26 winning nights in 32 broadcasts.