Posted at 4:30 PM EST odds are subject to change.

8:15 PM EST. Two weeks ago, the idea of the Colts being favored against anyone in this league other than maybe the Texans would have been a little rich. At that time Indianapolis had just lost a 26-3 stinker in New England to extend their losing streak to three games. The Colts’ futility cost former head coach Frank Reich his job, which made way for fan favorite, and all around “good guy” Jeff Saturday to make his way from the studio to the sidelines. Saturday reinstated veteran Matt Ryan as the team’s starting quarterback, which likely made owner Jim Irsay happy, as Ryan’s cap hit is over $35-million this season. Let Reich’s firing be a lesson to anyone that benches a high priced pivot again.

The Colts' first game under Saturday was a 25-20, Week 10 win in Las Vegas, where the Colts were a 4½-point pooch. Last week, at home versus the one-loss Eagles, the Colts were a 6½-point underdog, and were never in danger of not covering that game, as they took a 10-point lead into the fourth quarter. The Eagles would score the winning touchdown with just 1:20 to go. It wasn’t a bad loss by any means. We’re not going to take anything away from Indy for that effort, but we are going to point out that result has led to a sharp rise in the Colts’ stock, as they now move from a plucky underdog to a favorite in a prime time game. That is a much different role, and one they may not be well suited for. The last time the Colts were favored in this range at home they dropped a 17-16 decision to the Commanders.

Depending how willing you are to wash away the warts of the Reich era will depend on how much value you put into the Colts’ miserable analytics. We aren’t as forgiving as the pundits, pick sellers, and scribes that are slobbering all over Saturday. This is just a small sample of the positive press the first-time head coach is getting. 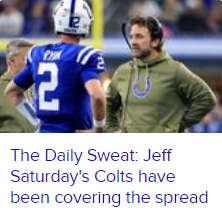 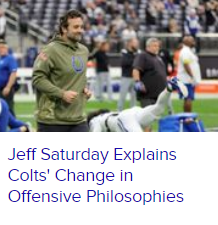 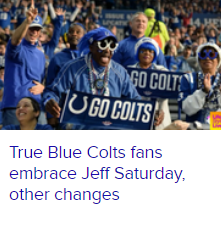 What ailed the Colts is not going to be easily fixed. Even with recent results considered, Indy is just 29th in weighted DVOA, which values their most recent games more than those played earlier in the year. No matter who the QB has been, they’ve led the 31st-ranked offense. Matt Ryan was a turnover factory until he was benched, but he hasn’t coughed up the rock in the last two weeks. That’s not sustainable when the Colts' offensive line is still not performing up to their price tag. Ryan was sacked four times by the Eagles. If he continues to run for his life, he’s going to turn the ball over.

We know the Steelers are down, but it is worth noting that they have played the toughest schedule in the league according to our friends over at Football Outsiders. Despite their meat grinder of a slate, the underlying numbers actually show the Steelers have deserved better this season than their 3-7 record shows. The Steelers estimated win total is 5.3. For comparison’s sake, the Colts’ estimated wins are directly in line with their 4-7 record. If this game were played two weeks ago, would the Colts have been favored in this range? We doubt it. Steelers outright is where the value is. That’s how we’re going to play it.