Posted at 2:45 PM EST odds are subject to change.

7:40 PM EST. The Mavericks have overcome their early season struggles and have now won seven straight games. The media and the market value wins over all else, so there is no doubt that the Mavs stock is at a season high, as this is their best run of the year. The wins are nice, and they all count the same in the standings, but when you look at who Dallas has been pounding on, reality sets in. Houston (thrice), San Antonio, New York, the Lakers and Minnesota. There isn’t a top 10 win in that lot. The Rockets and Spurs are dregs, L.A. was a 9-point dog at home last night to Miami, which gives us an idea of what the oddsmakers think of them. The Knicks and Timberwolves are two of the biggest underachievers this season. The Mavs haven’t played a contender since their game in Cleveland way back on December 17. The Mavericks lost that one, 105-90. When you start winning, it’s hard not to read your own press clippings. If you look at the sports page of the Dallas Morning News, you’ll see nothing but fluff when it comes to the Mavericks— 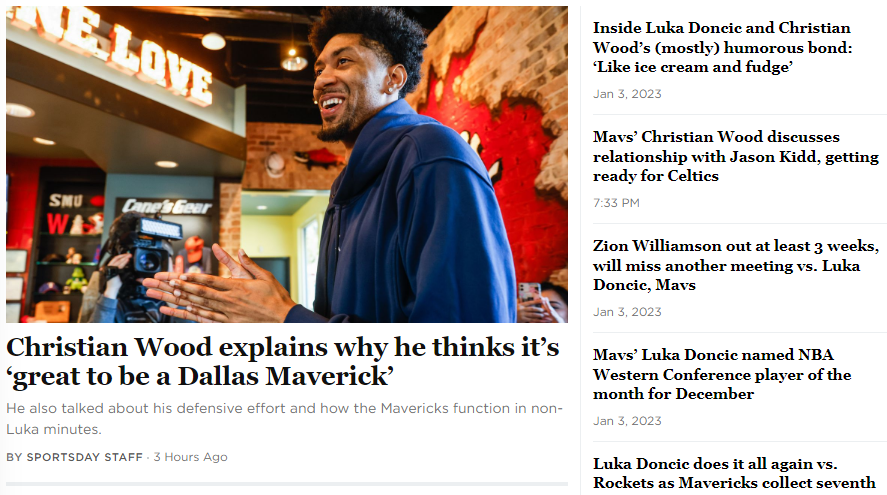 By contrast, the Celtics have lost two games in a row, and they are coming off a most embarrassing effort at Oklahoma City, where Boston gave up a season high 150 points and posted just 117 of its own. The game prior, the C’s lost to Denver, 123-111. There was a time when Boston was nearly unbeatable, but that run ended almost a month ago. After winning 17-of-19 games from November 4 to December 7, the Celtics have come back down to earth and are just 5-7 since. Boston is the perfect “buy low” companion to the Mavs, who we are selling high on.

This is a short price on an elite team. Arguably, the C’s are the best team in this league, but we digress. Boston sports a league best 8-3 record against top 10 teams. It is also 14-8 against top 16 competition. If there is one criticism against the Celtics, it's that they play down to their competition, but the NBA season is a slog and they are not the only team guilty of this. The difference is that Boston plays up to its competition with vigor. The C's are undervalued and fierce invaders, while the Mavs are a toothless host that has been getting fat on cupcakes. To that, we say, “Let them eat fudge!”